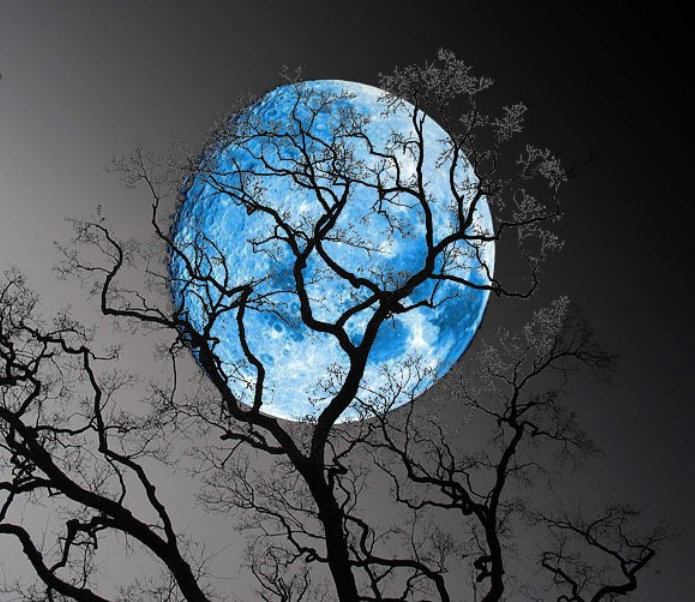 From Yahoo's Timothy Sexton: "One of the explanations for the term "blue moon" is the rare occasions when there are two full months within the same month. The second full moon is termed the blue moon. How rare is a blue moon? During the entirety of the 20th Century there were only 40 instances in which a single month contained two full moons. So you can see how describing something that is very rare could have been traced to this idea of the blue moon. To break it down further, a blue moon literally happens only about once every two and a half years, almost always in a month with 31 days because of simple mathematical probabilities.
The blue moon is not only a metaphor for something that occurs rarely, but it also has a history of portending luck, though without the pleasant and easy bifurcation between that of good and bad varieties. Superstition only has that the occurrence of a blue moon is the perfect time to plant the seeds of long-term goals that will blossom in the sun of a future day. This idea has to do with the superstition attacked to the blue moon that it contains magical properties. Any goals forwarded and planned beneath the glow of the second full moon of the month are thought to have the benefit of a kind of psychic tidal pull of the satellite. Unfortunately, the magic of the blue moon is unpredictably intense. To put in motion your goals for the future underneath the moon at the end of the month is the same thing as making a wish granted by a genie. If you don't use very careful and precise language, the result may very well be a sweet cookie full of arsenic. The potency of the magic of the blue moon is said to be concentrated and passionate; you may get what you wish for but in a way not foreseen if you allow loopholes to dangle beneath the bright reflection of the sun's light against the cold darkness of the lunar surface.

What if you were actually born during a blue moon? It is suggested that those who are lucky enough to be born during this rate celestial even are blessed with extraordinary potential. Unfortunately, that old bugaboo of the unpredictability of the blue moon means that this potential may never be fulfilled because just as the potential for greatness is increased, so is the potential for obstruction of greatness. While the possibility of achieving unparalleled heights is a birthright, unless the person actually born during a blue moon fully understands and exploits his great powers, he can expect to always receive that damning praise of having great potential."

So TODAY is your chance to make plans that may very well come true...but watch out for what Murphy does with 'em.
Collapse